Great video about a conversation with Sarah Cornell on the challenges of doing global sustainability research. Insights into matching ontologies with epistemologies and methodologies.

Every now and then, I’m given reasons by the German university system to seriously doubt if I can handle it in the long term. Overly complicated administrative processes aside, my biggest issue with the German university system is the explicit and implicit reinforcement of unhelpful hierarchies, particularly with respect to early career researchers.

Early career researchers (ECRs) — especially postdocs, but often also PhD students — are the future of academia. They are the powerhouses of productivity, the social backbone of departments, and the people who rescue students who have been neglected by their professors. Depending on where you look, their treatment in the German system varies from unhelpful to disgraceful.

Here are some of my “favourite” things that are wrong in the German system:

The CSAR is not a new tool!! It is simply a suggested process which brings together various assessment methodologies. Important and unique about the CSAR is that is starts with narrative, and then moves to assessment and maybe in some cases measurement, starting with self-defined indicators and in a co-productive way drawing on existing resources such as the Social-ecological production landscapes and seascapes indicators.

Please check out our website here, and get in touch if you’d like to know more or get involved with a case study trial.

I’ve reflected (and struggled) a bit with my involvement in this initiative, as a young Northern scientist, here: https://jamilathelorax.wordpress.com/2014/10/27/resilience-self-assessment-by-communities/

An older-male-herr-professor recently told me that a critique I wrote in response to his article was ’emotional’ (he cringed at the word).

It (my critique) was emotional.

It was an emotional response to a framework published in a powerful journal that I am afraid will shut-down important future research trajectories.

By the way, my co-author on that response was an established-male-academic. I wonder if he would have been accused of being emotional as well.

Abstract: Interdisciplinary, collaborative research capable of capturing the feedbacks between biophysical and social systems can improve the capacity for sustainable environmental decision making. Networks of researchers provide unique opportunities to foster social-ecological inquiry. Although insights into interdisciplinary research have been discussed elsewhere, they rarely address the role of networks and often come from the perspectives of more senior scientists. We have provided graduate student perspectives on interdisciplinary degree paths from within the Long-Term Ecological Research (LTER) Network. Focusing on data from a survey of graduate students in the LTER Network and four self-identified successful graduate student research experiences, we examined the importance of funding, pedagogy, research design and development, communication, networking, and culture and attitude to students pursuing social-ecological research. Through sharing insights from successful graduate student approaches to social-ecological research within the LTER Network, we hope to facilitate dialogue between students, faculty, and networks to improve training for interdisciplinary scientists.

I’m looking for a course in methods/research design to take next year, and since it’s a jungle out there I would be really grateful to hear about any suggestions and experiences you might have (qual, quant and mixed would all be of interest)! I’ll compile the suggestions and send them out in case anyone else is interested.

Some of us found this article very helpful: http://qz.com/547641/theres-an-awful-cost-to-getting-a-phd-that-no-one-talks-about/

The purpose of posting this isn’t doom and gloom, but rather:

I might not have felt so alone had I known how many people struggle with mental health issues in academia. A 2015 study at the University of California Berkeley found that 47% of graduate students suffer from depression, following a previous 2005 study that showed 10% had contemplated suicide. A 2003 Australian study found that that the rate of mental illness in academic staff was three to four times higher than in the general population, according to a New Scientist article. The same article notes that the percentage of academics with mental illness in the United Kingdom has been estimated at 53%.

These days, I seldom use my physics knowledge. But I still rely on the inner strength that I developed during my time in graduate school, which gave me the courage to mold my own life.

Latofat, a school principle in Bartang valley, the most remote valley of the Pamir mountains, sometimes wondered if the two foreigners who four years showed up at her door unannounced saying they were collecting recipes about Pamiri food would ever return. She was also a bit skeptical about whether there would ever be a book. When she heard that we were returning to Siponj village, with books in tow, she said she simply could not wait to see the book. “With Our Own Hands: A celebration of food and life in the Pamir Mountains of Afghanistan and Tajikistan” has arrived back in the Pamirs, and 1500 copies have started to be distributed to every community in the Afghan and Tajik Pamirs. The book began as a simple recipe book, to fulfil a promise to a grandmother and to document the rich unwritten knowledge about the unique agricultural biodiversity in the Pamirs. Over the course of 5 years, the book became much more. Nearly 700 pages of English, Tajik and Dari text and many photographs, describe the domestication of the mountains, the influence of the silk road, the importance of wild food, the resilience of transhumance and bring into sharp focus conflicting futures of the region. 5000 kg of book travelled from the Netherlands where they were published, over land to Tajikistan.

Latofat is the Principle of

the school in Siponj village in Bartang Valley. The village is often completely isolated in the winter months when snow closes in the valley. Perhaps because of this isolation, the valley maintains a ‘pure’ Pamiri language and is home to some of the strongest traditions in the Pamirs. The school in Siponj celebrates an annual national food day, where students ask their grandparents and elders how to make traditional foods from the unique agriculture all around them. Four years ago, we ate many different dishes, like Baht, Khomnigul, and Boj.  We took some photos of the beautiful and proud children, and with those, we conclude the book. This day brought us a lot of hope – that food, tradition and knowledge have a place not just in preserving the past, but also in imagining the future of the Pamirs. Naturally, we decided to return to this village first.

Why the title, “With Our Own Hands”? First is because the Pamirs would be a desolate wilderness, the way Sir Francis Younghusband described it to the Royal Geographical society in 1892. People make life-giving soil with their own hands. One thing that was never in question was the title of the book.

But another reason became much more apparent as we saw people react to the book. People were reacting to the knowledge that cannot be spoken, but is expressed through ‘doing’, in their own hands. Bobbi, who drove us to Siponj, admitted to us that he thought this was an impressive volume ‘about’ the Pamirs, but didn’t really know what it was all about. He spent the next few days, while waiting for us, going through it page by page, and then told us that this was a great service to the Pamiri people – it captured invisible knowledge.

He asked, how is it possible that two foreigners wrote this book? Why was it not Pamiris?

We often asked ourselves this question while writing

First, it was not just us. It was supported enormously by a group of dedicated Pamiri scientists who collected recipes, verified information and made all the connections for us. And the knowledge of course, is entirely from the Pamirs. All we did was pull it together.

The other answers are maybe more complex. Because we are outsiders, so we have the luxury and distance to observe.

And we didn’t only do it for the Pamirs. We also did it for ourselves. We grew up all up all over the place – the Pamirs are as much home as the other places we have spent meaningful time. The pamirs are a special place. One cannot visit the Pamirs without being overwhelmed by the grandeur of the mountains, the blue of the sky, the force of the rivers… the diversity of seeds, language and culture. From a purely functional perspective, we will need the seeds in the Pamirs as the climate continues to change for human prosperity. But more importantly, we don’t want to live in a world where the Pamirs and all of its diversity don’t exist! 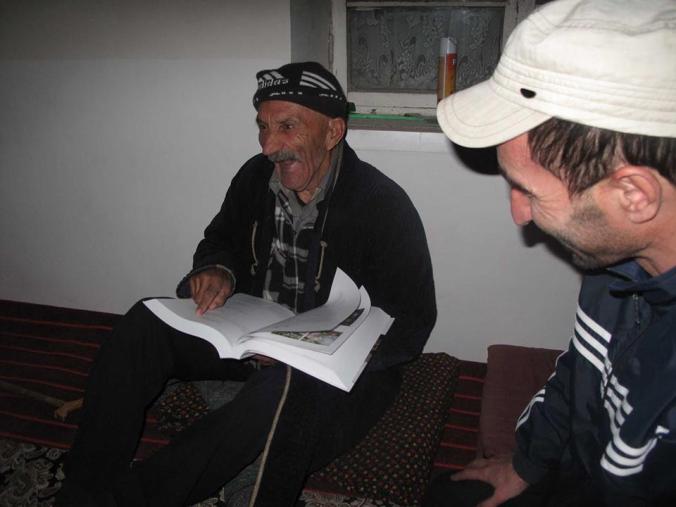 Perhaps my favourite reaction was when Akorbirsho, the father of a good friend and ethno-botanist collaborator, read the first recipe he recognised “Noshkukpa” and started shrieking with laughter. He then went through every page of the book.

Everyone who has seen the book, whether in the police, the bus stop or bazaar, has immediately asked how to get one. The Mountains Societies Development Support Programme will help distribute them to every community, to ensure that at least one copy is accessible in a public space.

The book should live, it is not a monument set in stone. Already we have received critiques: mistakes in spelling, which differs from valley to valley based on pronunciation; differences in recipes from grandmother to grandmother, village to village and certainly valley to valley; and discontent about showing some of the less appealing sides of the Pamirs (like the opium addiction especially on the Afghan side). We would love to find a way to facilitate the making of the book into a live forum for discussion, to capture these differences and nuances – to open up a space for imaginings.

Here is a link of me in the Pamirs giving the book back to a group of women who gave us a long list of recipes! http://www.stockholmresilience.org/21/research/research-news/11-23-2015-with-our-own-hands-comes-home.html

NB: this post was previously published on the SIANI blog and on jamilathelorax